Highlights of 2019 at Summit

Is the surface snow melting more often at Summit Station? Insights from the NSF-funded ICECAPS project.

In the early 1990s, the Greenland Ice Sheet Project (GISP-2) drilled a deep ice core at Summit Station that was over 3000 meters. This ice core revealed clues of past climate of both the Arctic region and the entire Earth. One analysis examined the ice core for particular layers that signified when the surface snow at Summit had melted. The result was that these “melt events” are rare. In fact, only about 50 melt events have occurred at Summit in the past 10,000 years. And over the past 3000 years, they have only occurred once in roughly every 250 years.

But due to anthropogenic climate change, the Arctic region, including Greenland, is experiencing dramatic changes. Temperatures are rising in the Arctic at approximately twice the rate of other locations on Earth. In general, this causes a decrease in the temperature difference between the Tropics and the Arctic. As this temperature gradient weakens, more extreme events occur both in the Arctic and at mid-latitudes. One result has been extreme events over the Greenland Ice Sheet. In July 2012, a melt event occurred at Summit, the first since 1889. This event was caused by extremely hot and moist air being advected from the central U.S. up and over Greenland. The NSF-funded ICECAPS research team also showed that the cloud cover during this event was important. It was kind of a “Goldilocks paradigm” where no clouds would have created a colder surface, as would have thicker clouds. But the particular clouds on that day in July 2012 contained just the right amount of liquid water droplets to heat the surface and bumped the temperature up to the melting point (0 C). A rare event!

So, it was very surprising when another melt event occurred on 12 June 2019, only 7 years after the 2012 event. And then again on both the 30th and 31st of July, two more melt events occurred. That’s a whopping 4 events in 7 years!! The ICECAPS-ACE researchers are currently poring over all their data to determine what happened. Their preliminary results show that the conditions were quite different from those in July 2012. First of all, the 2019 events came from different locations. The hot air for the June event came from central Europe rather than the U.S. Also, it wasn’t continuously cloudy during these events. Furthermore, could the solid snow layer in the snowpack from the June event have influenced the July melt events? We’ll have to wait for the final analysis.

So, is the surface snow melting more often at Summit Station? The answer is obviously yes. But stay tuned for a more complete description of the interesting 2019 melt events in the near future! 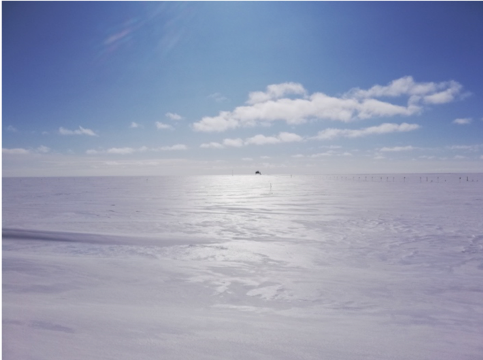 Under the NASA-funded Wireline Analysis Tool for Subsurface Observation of Northern-ice-sheets (WATSON) project, a team from the Jet Propulsion Lab (PI: Rohit Bhartia), Honeybee Robotics, and Montana State University, traveled to Summit Station in June and July to test an instrument that could someday be used to detect life on the polar ice caps of Mars or the icy moons of our solar system’s outer planets. The device consists of an ice drill system integrated with a deep ultraviolet Raman and fluorescence spectrometer that is able to detect and characterize organics, microbes, and other potential biosignatures down the borehole in-situ. (The spectrometer is a simplified version of the SHERLOC instrument on the Mars 2020 rover). In-situ characterization of subsurface ice will lead to a better understanding of how life can survive and be preserved in the icy regions of planetary bodies (e.g., Mars poles, Europa, Enceladus). The instrument development was funded by NASA’s PSTAR (Planetary Science and Technology Through Analog Research) program with the ultimate goal to deploy the drill/instrument to Mars or the ice moons of the outer planets. Additional goals of the WATSON project are to further the understanding of the patterns of organics, microbes and other biosignatures present in layered deposits in ice sheets, examine the spatial distribution of these signatures across the landscape in relation to point-source data, and demonstrate the feasibility of deployment on other planetary bodies.

Summit provides a good analog to extraterrestrial environments due to its high altitude/high latitude and high UV flux that potentially simulates higher radiation planetary surfaces and contains a clear terrestrial paleoclimate signal in the stratigraphic layering at the station. As an added bonus, existing data regarding microbial density and diversity, along with extensive records of corresponding environmental past processes (i.e., volcanic eruptions, ocean chemistry inputs and anthropogenic influences) exist from current cores to compare with the new measurements.

WATSON had been previously deployed outside of Kangerlussuaq (spring 2017 at the 660 site). This past season, the team drilled to 110 m at the site of the previous Dartmouth College Baker ice core project about 5 km north of the station. WATSON was successfully deployed and, for the first time, demonstrated robotic drilling and mapped the spatial distribution of organics and microbes in the borehole. Robotic drilling techniques involved inch-worming up and down the borehole while scanning with the instrument and acquiring core samples. The group is hoping to return to Summit in 2021 to further test WATSON. 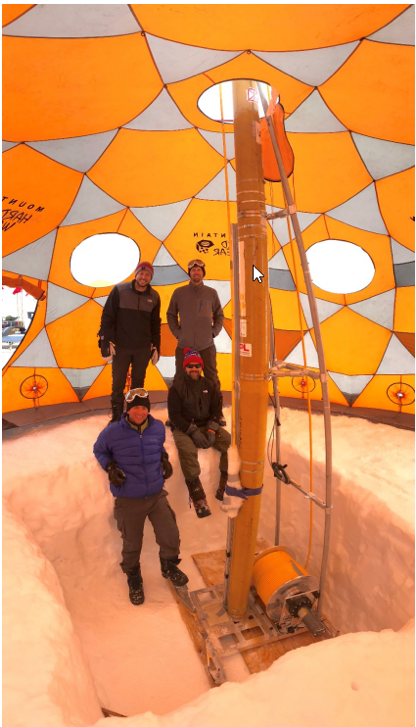 In May 2019, a team of researchers from the University of Leeds in UK, led by Heather Guy and Bethany Wyld, installed a suite of instruments at Summit Station for an Aerosol-Cloud Experiment (ACE). This effort is part of the long-term Integrated Characterization of Energy, Clouds, Atmospheric state, and Precipitation at Summit (ICECAPS) experiment, which was started at Summit Station in the summer of 2010. The new combined effort is called ICECAPS-ACE. The new suite includes a series of ground-based instruments to measure different sizes of aerosols, as well as an aerosol filter sampling system for measuring ice nucleating particles. There are also sensors at four levels on the TAWO tower that measure radiative and turbulent heat fluxes near the surface. Data collection began in June, which included both of the melt events in summer 2019. The instruments have also observed several episodes of high aerosol levels at Summit.

In the summer of 2019, the ICECAPS-ACE research team flew a quadcopter drone at Summit Station. The purpose was to obtain profiles of aerosols in the near-surface atmosphere. Researchers outfitted the drone with a small, lightweight optical particle counter (OPC) that measured the size distribution of aerosols from 0.35 to 40 micrometers in 24 bins. This instrument is identical to one being operated near the surface at TAWO by the ACE team. The goal is to use the data from the drone flights to compare how the aerosol concentrations vary as a function of altitude.

However, drones also take really phenomenal pictures! So, the drone was flown on several occasions in an “orbit” around Summit Station. Both videos and images were obtained as the drone circled the station. Here are some cool examples!