Summit Station wrapped up the 2018 summer after a season marked with weather and wildlife challenges. Feb 24, 2018 saw the highest recorded wind speed at Summit, as the NOAA weather station registered gusts of 104 knots (sustained wind speeds of 71 knots). The Summit winter-over four person crew, the science instruments, and the camp infrastructure weathered the storm with very few problems, save for a lot of digging. 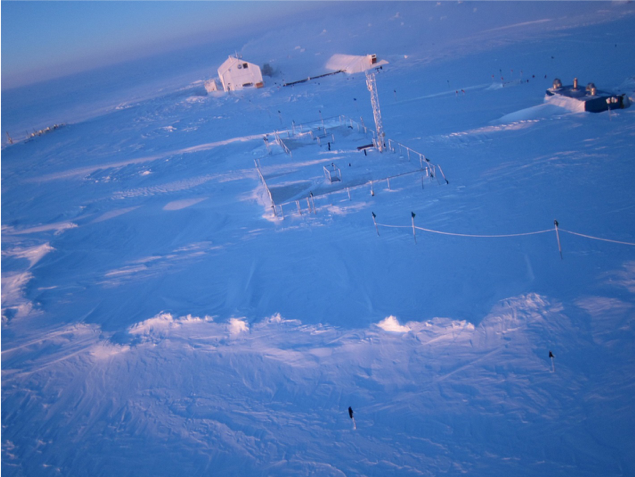 On June 13, 2018, a polar bear was seen in the early morning hours at Summit Station. This was the first confirmed occurrence of a polar bear visit to the station since it opened for summer operations in 1989. NSF Research Support and Logistics (RSL) and CH2MHill Polar Services (CPS) worked closely with the Government of Greenland and local police representatives to ensure the safety of the personnel at Summit. The bear was shot by a hunter who was flown into the station on 15 June. Following a protocol issued by the local Greenland authorities, the hunter fired warning shots in an attempt to chase the bear from the camp, but the bear did not retreat. All 31 people on the station worked together effectively to mitigate the problem and ensure that everyone was safely inside and uninjured.

Several measures have been taken to maintain safety since the occurrence, including bear safety training for all personnel, establishment of a night watch at station in the summer and a head-count system that allows everyone on station to readily identify occupied tents. In preparation for the 2019 and subsequent summer seasons, CPS and NSF RSL are researching possible technological solutions including alarms, deterrents and monitoring stations with the primary goal of ensuring the personal safety of everyone working at Summit Station through bear detection. NSF RSL is also investigating procurement of additional hard-sided berthing options for summer occupants.

The 2018 season saw the demobilization of the Science and Operations Barn (SOB), with much of the structure retrograded to Kangerlussaq. Some of the arches have been retained on-site for potential use in a mobile storage facility that would be intended to reduce the size of the winter-over berm, as well as the effort required to access stored materials during the winter. There are also several pallets of SOB material staged at Summit for retro in 2019. The Summit Mobile Garage (SMG) has been in operation the last two seasons. Current plans anticipate that it will be relocated to mitigate drifting during the 2020 summer season. Several incidents of water penetrating the floor substrate have occurred over the past year, causing concern that the floor structure has been compromised. CPS and NSF are discussing options to mitigate this ongoing issue.

Construction materials have been procured and staged for the new Elevated Berthing Module, a key component to realize NSF’s vision for the station: for Summit to become an efficient, flexible observing platform supporting seasonal campaigns for research and training as well as a variety of research fields utilizing state-of-the-art technology to enable year-round measurements made autonomously or with minimal human presence. Work has been ongoing to reduce the station’s footprint on the ice sheet.

Several exciting projects wrapped up successful summer seasons at the station, and results are highlighted in publications from the past year.

The Integrated Characterization of Energy, Clouds, Atmospheric state, and Precipitation at Summit (ICECAPS) project continued their long-term, focused examination of Summit atmospheric processes, extending year-round measurements that have been made since 2010. Over the summer, the already impressive and extensive ICECAPS instrument suite was expanded to include coupled aerosol measurements through a partnership with the UK Natural Environment Research Council (NERC) and the NSF through an expansion project called ICECAPS-ACE (Aerosol-Cloud Experiment). Both ICECAPS and ICECAPS-ACE are part of the Year of Polar Prediction (YOPP) focused on providing observations for the assessment of numerical models of polar climate processes. Find out more about their project: http://icecaps.ssec.wisc.edu/

ICECAPS-ACE expands the current ICECAPS project to provide a better understanding of aerosol-cloud interactions and properties over the Greenland Ice Sheet. ICECAPS-ACE will also overlap with field activities of the Multidisciplinary drifting Observatory for the Study of Arctic Climate (MOSAiC) project. ICECAPS-ACE is a joint NSF-NERC funded grant and will continue until August 2020. The project has entrained a new polar researcher, PhD student (Heather Guy, based at Leeds) who will make Summit a central focus of her dissertation. This summer, the ICECAPS-ACE project completed the installation of a condensation particle counter (measuring number of particles >5nm), an AlphaSense optical particle counter and a Compact Lightweight Aerosol Spectrometer Probe (CLASP). Next May, they will install instrumentation to measure the concentration of ice nucleating particles at the Temporary Atmospheric Watch Observatory (TAWO) facility and instrumentation on the Met Tower to measure surface energy balance. Other major efforts of the field season included moving the Mobile Science Facility in order to reduce drifting around the building and helping to ensure robust measurements from the Summit solar tracker.

Detlev Helmig (INSTAAR CU-Boulder), Christine Wiedinmyer (CIRES CU-Boulder), Louisa Emmons (NCAR), Maria Val Martin (U. Sheffield), and Helen Angot (INSTAAR CU-Boulder) recently started a new NSF AON project, Atmospheric Tracers for Arctic Wildfires, Air Pollution, Atmospheric Chemistry and Climate Change at Summit that will extend the current VOC record at the site to 2023. The project builds on long-term VOC measurements dating back to 2004 funded by the NSF with bridge funding provided by NASA in 2018 that allowed the important record to continue uninterrupted. The project seeks to determine the occurrence, source regions, emissions, trends, atmospheric and climate impacts, and feedbacks of wildfires in Greenland and the wider Arctic as well as the trends of methane and NMHC in the Arctic and the relation of these trends to emission changes within and outside of the Arctic. http://instaar.colorado.edu/arl/Global_VOC.html 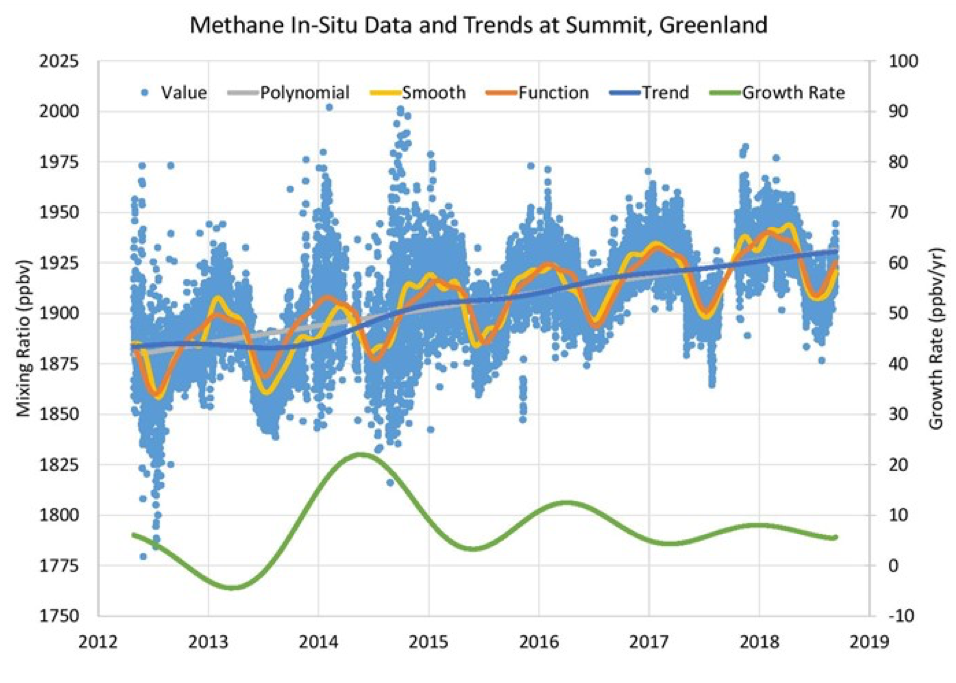 High time resolution in situ gas chromatography methane measurements at Summit from the beginning of the first phase of the NSF AON project starting in 2012. Over 96% data coverage has been achieved. Data were processed for trends and seasonal cycle using NOAA GMD algorithms. The green curve underneath shows the methane growth rate. There are indications that the methane growth may possibly have been slowing down slightly during the last couple of years.

Dartmouth College continued work examining near-surface snow spatial variability using autonomous rovers, collecting surface reflectance and ground penetrating radar data over 10s of square kilometers. FrostyBoy, a new robot developed by Polar Research Equipment (a student-founded research and engineering small company) and the Polar Regions Robotics laboratory at Dartmouth College, collected ground penetrating radar data across two field deployments in June and July 2018. The data collected will be used to track inter-seasonal accumulation and compaction rates in the dry snow zone. FrostyBoy is all-electric and optionally solar powered, which allows its use in sensitive areas such as Summit’s clean air sector. The project page can be found at https://engineering.dartmouth.edu/research/robot-design-and-smart-navigation and https://www.polarresearchequipment.com. The work was featured at the 2018 AGU Fall Meeting: https://agu.confex.com/agu/fm18/meetingapp.cgi/Paper/392544 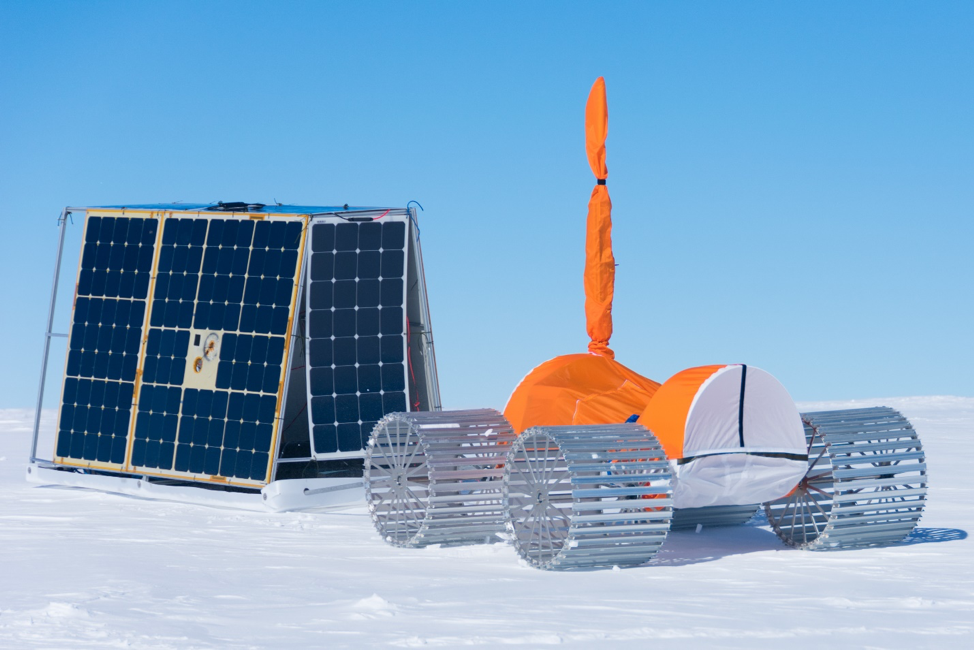 In July, researchers from Macquarie University, GFZ Potsdam and Swansea University, led by Dr. Kate Selway from Macquarie, traveled to Summit Station to conduct geophysical surveys of the electrical conductivity of the Earth up to depths of 400 km in order to image the Greenland mantle impacted by the Iceland Plume using magnetotellurics (MT). The measurements made at Summit constitute the first MT observations on the Greenland Ice Sheet. Summit science technicians helped support the project, retrieving instrumentation several kilometers away from the main station and helping make repeat measurements. https://www.mq.edu.au/about/about-the-university/faculties-and-departments/faculty-of-science-and-engineering/news-and-events/departmental-news/news/measuring-the-melting-of-the-greenland-ice-sheet